Warning: file_exists(): open_basedir restriction in effect. File(/nfs/c07/h01/mnt/173497/domains/brilliantrecording.com/html/wp-content/wptouch-data/themes/router.php/readme.txt) is not within the allowed path(s): (/nfs:/tmp:/usr/local:/etc/apache2/gs-bin) in /nfs/c07/h01/mnt/173497/domains/brilliantrecording.com/html/wp-content/plugins/wptouch-pro/include/classes/wptouch-pro.php on line 1558
 Recording Log #1 | Brilliant Recording 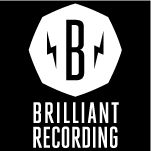 I took a really different approach to electric guitars for this session.  The client really wanted to keep a vintage tone and vibe on all of the instruments.  This meant that I wasn’t going to be doing my standard setup for electrics.

I rounded up Brad Jackson of Jackson Ampworks (who knows a thing or two about guitar tone).  We talked about the session, and he showed up with a vintage Silvertone amp a 1963 Gibson 335, Tom Anderson Tele and his 65 Strat.  Most of the vintage tones were achieved using the 335.

I ran two mics, a Royer 121 and a Coles 4038, about 16″ back from the cabinet through vintage Neve mic pres.  The Coles immediately brought the vintage vibe while the Royer brought a more modern tone.  The pedals used were an Analog Man Sunface Fuzz NKT-275 Red Dot, Analog Man KOT, Keeley Katana Boost, Fulltone Supa Trem and a TC Electronics Nova Delay.

Generally, Brad left the Katana Boost on whenever he wanted to push the amp into overdrive and only used the Sunface and KOT for specific lead tones.  The Nova was used on one solo section just to add some depth and on one other song where some long sustained clean notes were needed.  Other than that, the amp was ran dry with no reverb or delay.

I have to say that as soon as I heard the amp in the control room, I realized that it was the sound I had grown up hearing in all those 1950’s blues recordings.  It was also used quite extensively by Led Zeppelin and more recently, it is one of the signature sounds of Jack White.

They didn’t have a lot of overdrive pedals back in the day, so the only way to really achieve that overdriven sound was to crank the amp to 11.  The Silvertone was one of the easiest to do this with due to the lower wattages most of them had.  I have to say that it’s pretty surprising how stinking good that little amp sounded cranked up.  I also felt a little nostalgic when I realized that we weren’t relying on a ton of effects or layers of guitar parts like we would have done if it were a pop tune.  Just a guitar and an amp, the way it was when good music ruled!

The Clip of Brad playing is the 335-> Sunface-> Katana -> Silvertone